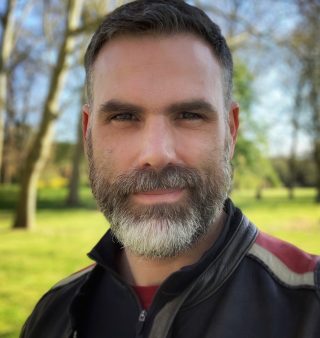 Scott Pritchard was one of the first artists to join ILM’s new London studio in 2014 for Avengers: Age of Ultron. Since then he has worked on a number of features including Star Wars: The Force Awakens, Avengers: Infinity War, and Avengers: Endgame. In 2019, he joined the ILM TV department as Visual Effects Supervisor for Brave New World.

Pritchard has 17 years of VFX experience and prior to joining ILM, spent seven years at Double Negative, where in 2011 he received a VES award for his compositing work on Inception.

Pritchard enjoys the creative process of working with his clients to develop ideas from script through to finished shots. He fosters collaborative working environments within his teams, providing the creative guidance needed to realize a client’s vision.

Originally from Dublin, Ireland, Scott holds a MA in Digital Effects from Bournemouth University, and a BSc in Industrial Design from Napier University, Edinburgh. He also studied Modelmaking at IADT Dublin, where he interned on his first feature Space Truckers, as part of the miniatures team.

Outside of work, Pritchard is an avid mountain biker and a keen guitarist, gigging regularly in local pubs & clubs.