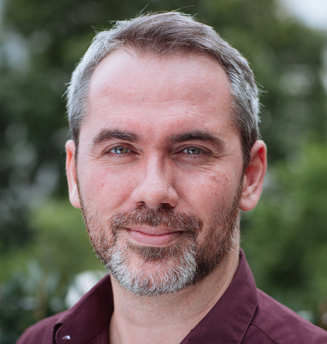 Animation Supervisor Mathieu Vig recently finished work on Ready Player One, having previously worked on Doctor Strange and Teenage Mutant Ninja Turtles 2 at Industrial Light and Magic’s London studio. Mathieu’s first role at ILM London was on Avengers: Age of Ultron in 2014, shortly followed by Star Wars Episode VII: The Force Awakens, on which he developed the face rig for Maz as well as being the animation lead on the sequences involving the Maz and Snoke characters.

Starting off his career in 2D animation, Mathieu studied the subject at Gobelins School of Visual Communication after watching Jurassic Park and Aladdin in 1993. He went on to work on Doom, Underdog, Charlie and the Chocolate Factory, Harry Potter and the Deathly Hallows: Part I, Gravity, and Paddington. With a particular interest in creature animation and character acting, Mathieu is known for his facial animation and rig development work. He has a knack for overcoming technical challenges, having lead the animation team on the 13-minute long opening shot in Gravity.

Mathieu won a Visual Effects Society Award for his work on the animated character Dobby in Harry Potter and the Deathly Hallows, and was also nominated for his work on Gravity and Primeval.