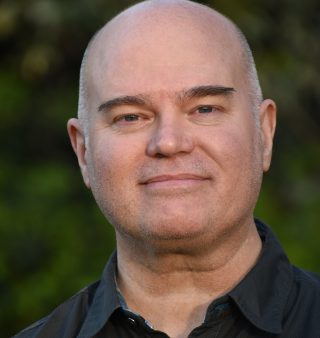 Jeff Sutherland joined Industrial Light & Magic in 1999, first as a compositor, then sequence supervisor, before moving up to compositing supervisor on Marvel Studios’ first feature film, Iron Man. A veteran of the Transformers, Marvel Cinematic Universe and Star Wars franchises with more than 23 years of industry experience and over 40 feature film credits, Jeff has more recently served as an Associate Visual Effects Supervisor on projects including A Quiet Place and The Mandalorian.

After graduating from Carleton University in Ottawa, Canada, with a degree in Journalism and Film Studies, Jeff made his way to the San Francisco Bay Area where his interest in computers and technology led him to a Silicon Valley video game startup where his responsibilities included sound design, video editing and computer graphics processing. This was where Jeff discovered his love for digital compositing and visual effects, leading him to pursue a career in feature films, first in Los Angeles, before landing at ILM in the Bay Area.

In late 2019, Jeff moved his family to London where he is an Associate Visual Effects Supervisor in the ILM London office. When he’s not elbows deep in visual effects, Jeff likes to play ice hockey, sail, ride his bike and make music.