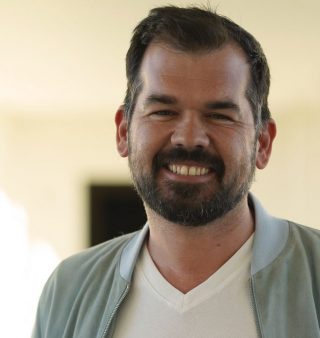 After 20 years in the interactive entertainment industry, Ian Milham joined Industrial Light & Magic to help lead the development and use of its revolutionary Stagecraft virtual production process on Jon Favreau’s The Mandalorian. He serves as the leader of the on set ILM team delivering photorealistic, in-camera visual effects using real time environments and an LED volume, and works with productions on creative and technical development and operation of seamless virtual sets and imagery.

After the success of Season One and the development of Season Two, Ian went on to help oversee the expansion of Stagecraft worldwide and work with films such as Thor: Love and Thunder and Star Wars Obi-Wan Kenobi on successful use of virtual production.

In addition to on set Stagecraft work, Ian is the supervisor of ILM’s San Francisco stage, which contributes motion capture performance and virtual camera work to numerous ILM projects.

Ian graduated with a BFA in Illustration from Syracuse University and began work as a matte painter and real time environment artist, before moving up through the ranks to become an Art Director and Creative Director. His Art Direction on Dead Space earned a Best Real-Time Visuals nomination by the Visual Effects Society and Outstanding Visual Achievement BAFTA nomination.