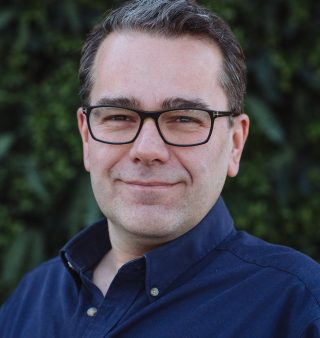 Hayden Jones joined Industrial Light & Magic London in 2019 as a VFX supervisor on The Mandalorian season one. Working with the team tasked with bringing “the Child” to the screen, he received both a Visual Effects Society award and Primetime Emmy for his work on the show.

During Hayden’s early VFX career as a 3D artist, compositor and in later years vfx supervisor, he worked on many film projects, including Lost in Space, Armageddon, Mission Impossible 2, Tomb Raider, Hellboy 2, Stardust, and Les Miserables. He also worked on a multitude of episodic shows for many broadcasters including BBC, HBO, SKY, National Geographic and ABC. During this time he was nominated twice for a Primetime Emmy Award for Outstanding Visual Effects.

In 2013, Hayden was one of the founding three members of DNEG TV, where, as Executive VFX Supervisor, he oversaw all creative aspects of the department. This wide-reaching role incorporated pitch work and concept design, through to supervision and final shot production. He has worked on numerous projects for Netflix, Amazon, Marvel, ABC, NBC, STARZ, BBC, and SKY. As VFX supervisor, he received both a nomination and won the BAFTA for Special, Visual and Graphic Effects.

Outside of work, Hayden has been a part of BAFTA’s UK scholarship programme, where he has been a mentor for a number of young artists looking to progress their careers into the visual effects industry. He is also a keen artist and photographer, and can regularly be found doodling in a sketchbook at every opportunity.