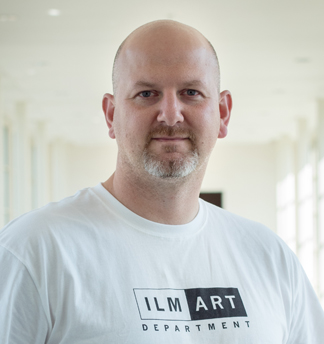 Alex Jaeger joined Industrial Light & Magic in 1995, lending his talents to the creature/model shop where he served as a model maker on numerous commercials and feature films. During this time, he also created storyboards for the ILM Art Department until 1996, when he was appointed as Visual Effects Art Director on Star Trek: First Contact. Jaeger also designed many of the film’s spaceships that were later used in the modern incarnations of the Star Trek television series.

An avid car enthusiast since his youth, Alex Jaeger attended The Center for Creative Studies College of Art & Design in Detroit for two years, focusing on transportation design. A greater interest in film led him to The Art Institute of Pittsburgh, where he studied stop-motion and computer animation along with industrial design. Jaeger went on to design three Fry’s Electronics stores for Christiansen Design in Sausalito, California, and worked for R. Talsorian Games, creating designs and illustrations for “Cyberpunk” role-playing books.

In 2012, Jaeger was key in bringing to life Guillermo del Toro’s kaiju epic, Pacific Rim, as the Visual Effects Art Director and “Jaeger Master.” He is also one of the key members of the Transformers franchise team, lending his auto expertise to all four films.