Today, ILM Senior Compositor, Charmaine Chan explains her visual inspiration for the Kylo and Luke confrontation after the Battle of Crait in Star Wars: The Last Jedi.

These days, majority of blockbuster films are shot in front of a giant green/blue screen. Taking an actor in front of a screen and grounding them into a scene to help promote their development and storyline is always a tough challenge. On Star Wars: The Last Jedi, I got tasked with such a scenario, specifically the scene where Kylo and Luke finally confront one another after the Battle of Crait. It’s a tense moment and I was assigned to handle the Kylo Ren shots under the direction of VFX Supervisor Eddie Pasquarello and my sequence lead Peter Demarest.
The scene we were set out to create was right after a giant battle has just occurred, the land was all torn up, ash and salt flying everywhere, and we needed to create a sense of intensity, passion, and rage from the duality built up between Kylo and Luke.

The first time I saw the plates they reminded me a lot of the sparring sequence from Kurosawa’s Seven Samurai. It actually happens to be the 65th anniversary of Seven Samurai this year, so its only appropriate to give a nod to the film and cinematography that has influenced so many other films, including this one! 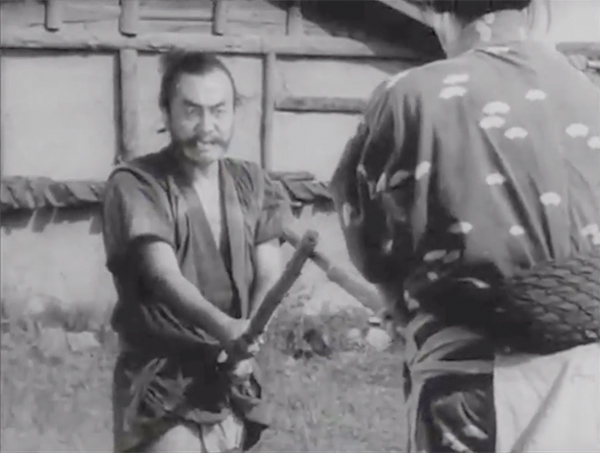 The main thing I noticed within Seven Samurai is the simplicity and stillness of each shot and angle. Yet the way the subject is framed leaves us in anticipation of their next move. We wanted to do the same within our shots, where the backgrounds were not distracting us from focusing in on the two main actors.
We had the AT-M6’s in the back at a complete stand still waiting for orders, and a dramatic landscape that was subtlety changing as time passes by during their exchange. We represented this change via two major factors: the sun setting and the buildup of salt over the red kyber crystal floor.

When Kylo first approaches Luke, we set the backdrop very warm with saturated orange and reds and a strong contrast. We went through many iterations of both the sky color and FX animation of smoke/dust wisps over the floor. We then slowly transitioned the sky color to be less saturated, and used the animated smoke to create even more salt on the ground. By the time Kylo is ready to fight Luke, we’ve created a very different aesthetic that’s both cool toned and diffused.

What transpired next is probably one of my favorite saber duels, and being able to help set the mood right before that fight was a great refresher on visual storytelling.