Movie fans know the term concept art as one of the earliest stages of filmmaking. Directors and writers collaborate with the ILM Art Department to visualize story beats, characters, design creatures, vehicles, and define a film’s tone and mood. But, even after the cameras have rolled, the ILM Art Department plays a critical role in finishing the film.

John Knoll, ILM’s Chief Creative Officer and Executive Producer of Rogue One, said it best, “What we do is art. It should be no surprise art direction and design are things we do throughout production and post. Strong support from the ILM Art Department is critical to the success of the film.”

Much of the work in Post Visual Development is pure design. We design digital environments and sets, we alter designs from pre-production, we create ships, weapons, and creatures.

Designing digital environments after plate photography allows flexibility in storytelling. For example: the Citadel sequence. The modular design and concentric circles allowed Gareth visual cheats: a character can jump huge distances geographically as needed for the plot, but the audience is not lost visually because the symmetry of the design.

The design is also a nod to the Empire logo. (Stephen Zavala)

After designing digital environments, Gareth goes to work finding the best shot composition for the story. Once a shot is composed within the environment, we fill in the details.  Panelling, piping, ventilation, control panels, landing pads, exhaust ports, nuts and bolts — we paint it all.

Our most crucial role is problem solver. How does the landing gear on this ship retract? What does this droid look like after being damaged in a battle? How do TIE fighters launch from a Star Destroyer?  We create visual answers.

In Rogue, the Death Star is key to the plot of the film. But, one thing never addressed in the previous Episodes is: what do the North and South poles look like? Based on a Ralph McQuarrie image, we came up with an answer.

Another challenge we faced: Spheres in Space. In Rogue, we travel to several different planets. We spend a lot of time looking at the Death Star. We were tasked with making each sphere in space dynamic and interesting.

We work closely with ILM Visual Effects to solve visual problems and design effects sequences. When the Death Star attacks, what does the impact on a planet look like from space? Is it a fiery explosion? A rocky blast? How does it expand through the planet? How far does it reach into space?

Along with effects design, we work closely with our Visual Effects team to make sure each frame of film has perfect lighting. Often that means doing several passes on a frame, painting over environments making incremental tweaks, one to two percent variations. It can take a lot of time and a lot of patience. But once we have an approved lighting template, we pass our images down the pipeline for visual effects artists to create digitally.

For Yavin, we referenced a McQuarrie image to inspire the lighting environment.

Finally, we do a lot of work directly on plates. We paint set extensions and expand environments. We do shot designs all the way from placing a planet through a window, to Darth Vader casting a shadow at his entrance. We even influence traditional matte painting techniques for background images, like the one used in Vader’s castle below:

For Space Monkey [Bistan], we redesigned his gun in post because it needed to pack a bigger punch. The design is a nod to the cannons on Hoth in Empire Strikes Back. Both are designed to take down at AT-AT. The new design was then built by a digital artist and comped into the plate. 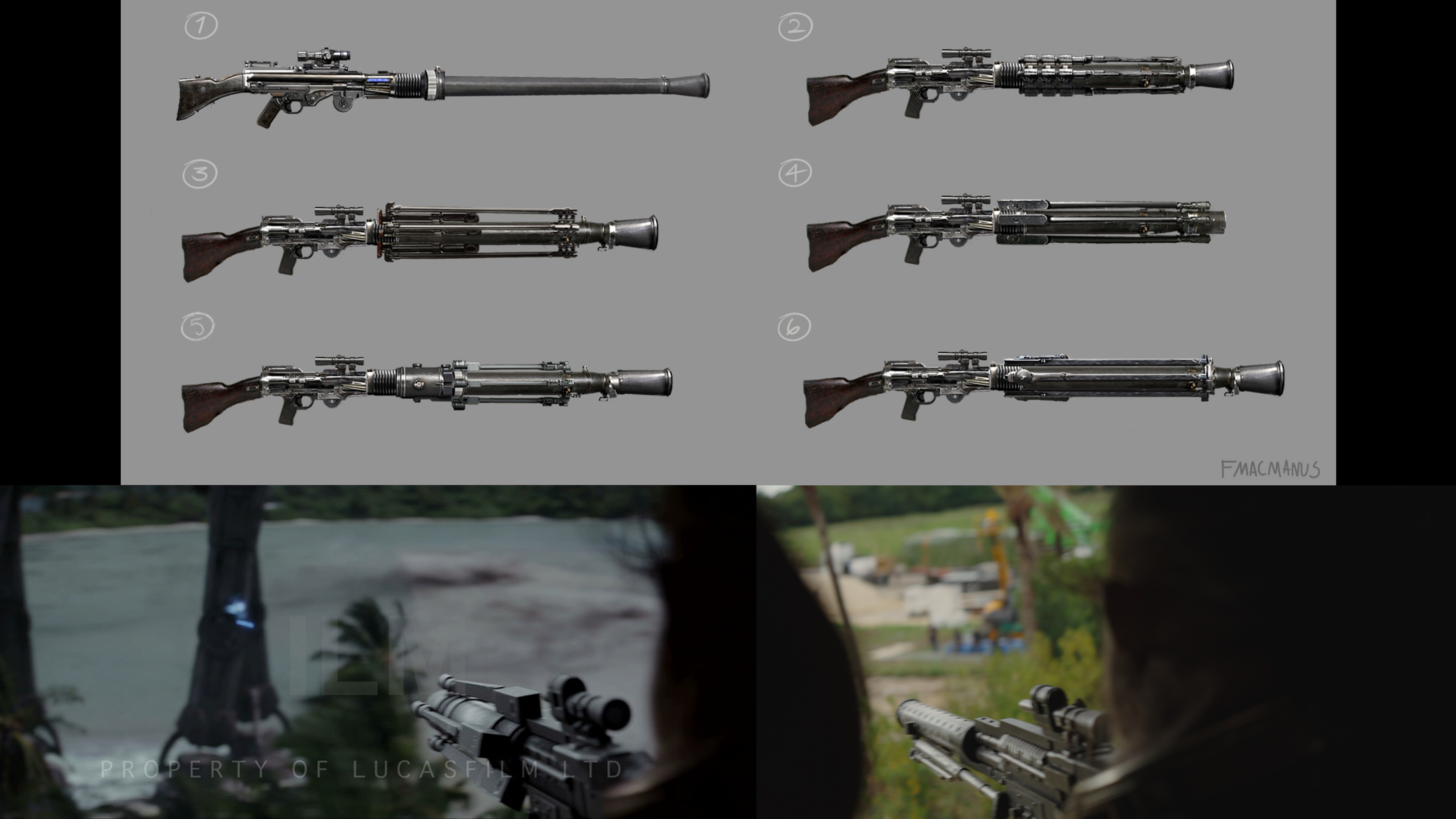 In Post Visual Development, the ILM Art Department functions as part of the Visual Effects team to fill in the world with realistic details, fine tune lighting, design FX scenes, and act as a problem solvers to make the film seamless frame to frame.

Post Visual Development Art for Rogue One: A Star Wars Story produced by: