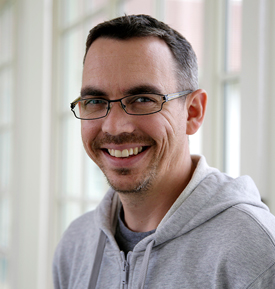 Richard Bluff is one of Industrial Light & Magic’s award-winning Visual Effects Supervisors, currently serving as the Production-side overall VFX Supervisor on Jon Favreau’s hit series, The Mandalorian. In this capacity, Bluff oversees every aspect of the visual effects effort on behalf of production, including responsibility for more than 3000 shots across each season as well as ongoing technical and creative development of the new game engine driven LED stage technology and workflow (StageCraft) for the show. Bluff received the Visual Effects Society Award for ‘Outstanding Visual Effects in a Photoreal Episode’ for his work on Season 1 and has continued in the capacity of overall supervisor on Season 2.

With a background in video games and environments, Richard Bluff joined ILM more than 15 years ago as a Digital Matte Artist and quickly rose through the ranks to become the Supervisor of ILM’s Environments Department where he reinvented standard workflows to provide artistically-driven solutions that were both innovative and efficient.

During this time, Bluff also continued hands-on supervision and shot work which included 2012’s blockbuster The Avengers. Bluff pioneered the development of a fully digital New York City which was featured throughout the end battle, earning a Visual Effects Society Award.

Soon thereafter, Bluff was promoted to ILM VFX Supervisor, overseeing work on such films as Above and Beyond, Lucy, Unbroken and the Marvel TV series Agent Carter. These experiences positioned Bluff for the role of ILM VFX Supervisor on Marvel’s Dr. Strange where he led the out-of-the box artistry and production methodologies to achieve the movie’s unique city deformations look. Work on Dr. Strange earned Bluff nominations for an Academy Award, a BAFTA award and VES awards.

Richard next turned his hand towards real-time game technologies, serving as one of two Visual Effects Supervisors on the simulator ride Smuggler’s Run for Disneyland and Disneyworld. These cumulative experiences throughout his career have positioned Bluff perfectly for the role he is currently playing as Production-side Supervisor on The Mandalorian. This role requires a proven innovative, technical and creative problem solver at the helm of the visual effects driven series.