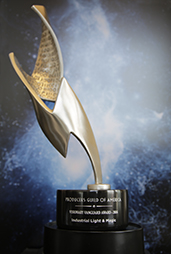 Industrial Light & Magic was honored with the inaugural Visionary Vanguard Award at the 27th annual PGA Awards ceremony on January 23, 2016. The award recognizes ILM’s groundbreaking work in visual effects and innovations that have revolutionized storytelling. Previously, the Visionary Award and Vanguard Award were presented to separate recipients. In 2016, the PGA noted because of the unique nature of ILM’s contributions to technology and entertainment, the Guild had combined the two awards into a single honor.

“The decision to combine these two awards is a testament to the incredible achievements of ILM over the past 40 years,” said Producers Guild Awards Co-Chairs Michael DeLuca and Jennifer Todd. “ILM’s dedication to advancing the creative possibilities of film has inspired the imaginations of storytellers worldwide and provided the tools to transport audiences to richly immersive new worlds.”